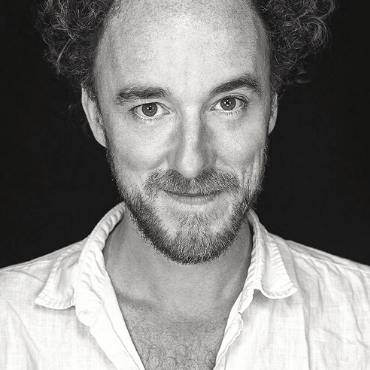 was born in Genoa, Italy, in 1977. He studied Industrial Design at the University of Architecture of Genoa and then in 1999 at the modern dance theatre school in Amsterdam. As an actor he works for the children theatre Teatro del Piccione staging “BFG”, “Chisciotte” and “I eat the Moon” in Genoa, and for Lindsay Kemp in Rome. After meeting Andre Gingras in 2000, he created the dance solo “CYP17”, which was performed in several venues throughout the world, and “The Lindenmayer System”, The Hague/Amsterdam. After joining Charleroi/Danses Plan-K/ Frederic Flamand, he performed with Angelique Wilkie in “Zeropoint”. Then in 2005, he takes part in UltimaVez/ Wim Vandekeybus participating and touring the creations of “Puur”, “Spiegel”, “Menske”, “Talk to the Demon” and the long movie “HereAfter”, Brussels. As playwright, he assists the choreographer/ director Elena Fokina with “Pristan” in Mexico, “Bielovodie” and “Between sky and earth” in Moscow. He performed for Klaus Jurgens in “Asa Nisi Masa” and in collaboration with Kenneth Flak, he created “2Halves”, at The Hague/ CaDance Festival. In 2012 he started collaborating with RootLessRoot/ Linda Kapetanea& Jozeph Frucek, for “Kireru”, “Europium” and “When the dogs assailed their masters”, Athens. In 2013 he premiered as an actor in German Jauregui’s “Confession”, Zurich. In 2015 he participated in “Tornar”, a creation with and for children, by Seppe Bayens, Brussels. In 2017/18 “Puur” was restaged, performing and assisting Wim Vandekeybus for the Swedish Royal Ballet, Stockholm Opera. In 2018 opening of the “Last Meal Cafe’”, art exposition curated by Tasya Krougovykh/ Pussy Riot-Moscow, Space W139 in Amsterdam. In 2019 his own work “El Gran Salto” premiered in Tijuana, Mexico. He also teaches contemporary dance and theatre workshops internationally.

“Principally when I am creating work I try to compose with what is given from the performers, I am trying to find moments in their being that are honest, ones those moments are caught and understood, we move on in our composition; physical and vocal scores are usually always present with flavours of cynicism, sarcasm and irony.”